Guess what time it is–time to do TMI Tuesday! 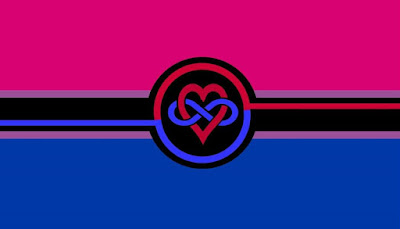 Primer to terminology used this week.

What is considered moral or immoral, accepted or prohibited is generally defined by the norms, values, and beliefs of society.

Ash
1. Agree or Disagree. If people want to have more than one spouse they should be allowed to do that.
Agree. I was just having this conversation the other day. I don't see why you can't be married to multiple people.
2. Do you believe in ethical non-monogamy?
Most definitely.
3. Is polyamory something you want?
I am polyamorous. It's the only way I will ever be able to have relationships. I knew from very early on in my life that I could never be with just one person. I used to say I would never get married because of that. Then, when I got older, I realized that you could still be married and be non-monogamous. I have identified as polyamorous since I was 17 years old and that will never change.
4. Do you wish that your ethical non-monogamy was a societal/cultural norm?
So much, yes! I am open about being polyamorous but not everyone is happy about it or accepts it. We are definitely looked down on by some people because of it. Some people think my marriage is less than just because I date and have sex with other people. Husband is my soul mate and I love him more than I can express in words. No matter who I date or fuck, that will never change.
5. If you are in or have been in an open sexual relationship, what are the best bits?
I would say that having crushes is not excruciating because you can fuck whoever you want, however, it seems that everyone I crush on is never available. Haha!
Bonus: Describe what your ideal intimate and/or sexual relationship would look like today.
My ultimate dream has always been to have my husband and a girlfriend living with me in the same house. Lately, that has been changing a little bit as I have been exploring dating men as well. So, I'm going to be greedy and say that I'd love to have my husband, a girlfriend, and a boyfriend all living with me in the same house. Kitchen table polyamory for the win. I'm sure it's not super realistic but I've seen people who actually live life like this, so I know it is possible.

Husband
1. Agree or Disagree. If people want to have more than one spouse they should be allowed to do that.
I agree with this, for the same reason that I feel that people should be able to pursue multiple relationships.
2. Do you believe in ethical non-monogamy?
I do believe in it. If things came along and stuff worked out, I would probably practice it with someone other than Wife.
3. Is polyamory something you want?
Ultimately, yes one day I do think I would want to dip myself back into these waters. For now, I am more than content to support Wife in her endeavors.
4. Do you wish that your ethical non-monogamy was a societal/cultural norm?
I do wish it was some sort of norm. I feel like ethical non-monogamy gets more shame and misrepresentation than it deserves and that it would help people in relationships to expand their love.
5. If you are in or have been in an open sexual relationship, what are the best
bits?
Right now the best part is supporting Wife and talking to her about her pursuits and exploits! Getting to hear about how she enjoyed herself after she comes home to me has become something I thoroughly enjoy.
Bonus: Describe what your ideal intimate and/or sexual relationship would look like today.
Damn. I don't really know honestly. I like the idea of having someone else to be intimate with as well as be intimate with me (plus also the sex) but I don't really give the potential for other partners a lot of thought. Ask me again later.
Posted by Sexilicious Ash at 8:17 AM

Sexilicious Ash
I am a 37 year old bisexual poly woman who is addicted to sex and enjoys talking/writing about my experiences. Names have been changed to protect the people involved.